Clear, concise, and easy to use. HIO Fact Sheets provide Ottawa-specific statistics about the changing nature of our local population and labour market, and the vital role of immigration as a source of skilled labour. 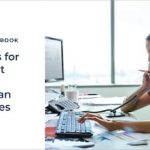 This Playbook shares practical strategies to bolster immigrant inclusion at primary stages of the employment cycle: recruiting, hiring, onboarding, and integrating. These strategies are a starting point; if you are an employer or Human Resources professional, you are encouraged to engage with a coalition member in your region to deepen your understanding and develop strategies to ensure an immigrant-inclusive workplace.Strategies for Immigrant Inclusion in Canadian Workplaces 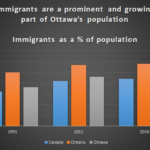 Newly released data from the 2016 Census shows that Ottawa continues to attract immigrants from around the world. In the last five years, over 30,000 immigrants have arrived in the capital region, adding to the rich diversity of the city.Ottawa Continues to Attract Immigrants 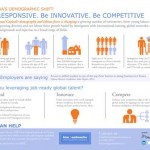 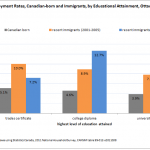 According to the 2011 National Household Survey, recent immigrants to Ottawa who held a university degree had an unemployment rate of 14.8%, more than three times higher than their Canadian-born counterparts. Immigrants are also more likely to work in jobs not commensurate with their skill levels and training.Ottawa’s Underutilized Immigrant Workforce 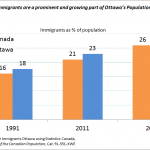 The Growing Diversity of Canada’s Capital

An increasing number of Ottawa’s businesses and public sector organizations are recognizing the strategic importance of building a workforce that reflects the diversity of the communities in which they operate and service. There is no doubt that Ottawa’s ethnic and cultural diversity have changed, and will continue to do so well into the future.The Growing Diversity of Canada’s Capital 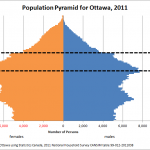 Ottawa’s employers will see an elevated number of retirements in the years ahead, as the baby-boomer retirement wave begins to crest. During the period 2001 to 2011, the number of employed persons in Ottawa aged 55 and over increased by 78%, more than five times the 14% growth rate of the overall workforce.Ottawa’s Aging Workforce

Older Posts
This jQuery slider was created with the free EasyRotator for WordPress plugin from DWUser.com.